No Handshake, No Worries 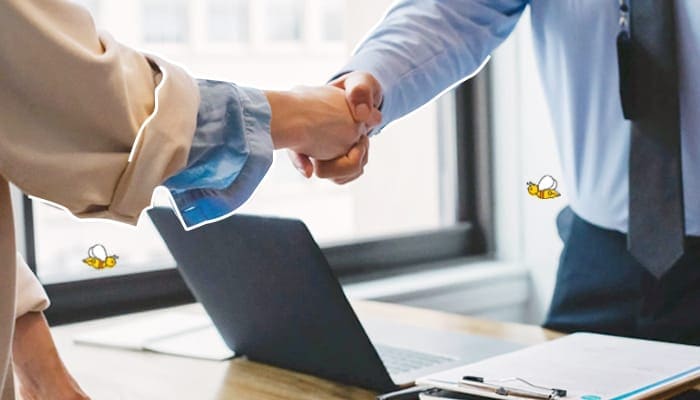 These days, finalising a deal requires a whole lot more than a simple handshake.

Paperwork needs to be filled out, terms and conditions reviewed and signatatures acquired. Especially where there are multiple parties negotiating a deal, a hold-up at any of these stages can cause significant delays in achieving the end goal.

If you’re like many businesses, you’re still trying to “dot the i’s and cross the t’s” manually, followed by a laborious process of printing, scanning, faxing and filing.

Imagine a world where your business didn’t have to worry about constantly staying on top of documents. In the age of digital transformation, there is a simple solution to transform inefficient workflows into new and improved systems. The best place to start is to rethink the way you get documents signed!

Death of the Handshake

The Pandemic has sparked a debate on the death of the handshake. Whilst some old-school individuals would prefer to disregard health risks and keep tradition alive than allow an ingrained way of doing business to die out, many business people propose that the fast-spreading nature of new diseases will result in handshakes soon being outdated.

Whether they come back in the future or not, for now, public health concerns have ruled out the frequent use of handshakes, especially in a professional environment. The question is, how do we seal critical business deals?

In response to new flexible work conditions, there has been an explosion in online meetings whether it be via Zoom, Google Meet or Microsoft Teams. This new way of meeting virtually is playing a big role in reshaping how we do business. In fact, the uptake of Zoom for video conferences grew from 10 million daily meeting participants to 200 million daily meeting participants in May 2020.

In response to the new world we live in, meetings, interviews and appointments are all being held online. You can even receive medical advice over the phone! Anyone with a computer or mobile device can keep up with their day-to-day appointments virtually, removing the need to shake people’s hands. As a product of meetings or interviews being held online, job offers, deals and supplier agreements are also being negotiated online, hence, the boom of eSignature providers stepping in to save the day.

Securing Deals in the Digital Age

Businesses of all sizes have struggled over the past few years and need to secure deals to stay above board. Handshake or no handshake, contracts and sales deals still need signatures from all parties involved.

Are you in an online meeting? Share a contract or agreement there and then, allowing parties to sign it ‘in the moment’. Avoid agreements getting stuck in inboxes and having to follow up weeks later!

Deals can occur in many forms but in order for it to be considered “legitimate” or “binding” legally-binding paperwork is a non-negotiable.

This can significantly slow down the process and may end up wasting your business a significant amount of time and money in back and forth communication. You’d be crazy not to want to significantly speed up the deal-sealing process. BeeSigned can make this dream a reality with our automated workflows. When it comes to critical documents, why wait? Seal the deal with an eSignature solution.

There are many benefits from making the switch to online signing such as:

Learn more about the BeeSigned tools that are helping teams secure deals remotely (and in a much more affordable way compared to other eSignature providers!)

No comments to show.

Thank you!
We’ll be in touch shortly.

In the meantime… why not check out some of our customer’s FAQs about BeeSigned!